Here's a bit of history about old-style flutes, and an explanation of why this type of flute is popular for playing Irish and Celtic music. 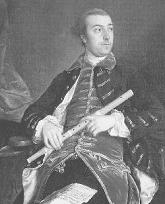 In the Middle Ages, the flute was made from a single piece of wood with a cylindrical hole--or "bore"--down its length. Sometime in the 1600's a major advance occurred when it was discovered that gradually reducing the diameter of the bore towards the end made the instrument more responsive and better in tune. This is what is meant by a "conical bore".

Relatively small holes were used to facilitate the cross-fingerings needed for chromatic notes; these gave a rather quiet, sweet sound. This flute, with six finger-covered holes and one key-covered hole, is what we know today as the Baroque flute.

In the 1700's the flute became increasingly popular with classical composers including Mozart and Beethoven. As the music became more demanding in terms of tempo and key signature, more keywork was added to the flute to overcome (or at least reduce) the limitations of the Baroque flute. By the end of the 1700's this trend culminated in the eight-keyed simple system flute, which had a key for every chromatic note (two for F), and whose range extended down to C (versus D for the Baroque flute).

The 1800's saw an explosion of interest in the flute by the general public. There was much demand for performances by flute virtuosos such as Charles Nicholson and Robert Sydney Pratten. As these virtuosos began playing to larger audiences in larger halls, being heard became more of a challenge. Nicholson was one of the first to advocate larger tone holes as a way of gaining increased volume. Pratten lent his name to a number of different "Pratten's Perfected" flute models, one of which--a large-holed, simple-system model--is valued today for playing Irish music.

At that time flutes were mostly made of wood or Ebonite. Ebonite is a synthetic material that was used for both its tonal qualities and its immunity to the climate-induced swelling, shrinking, and cracking that plagued wood instruments. By mid-century there were many different keywork systems in use, including Boehm's 1847 design which would eventually became dominant for playing classical music.

A Modern Perspective on Traditional Instruments

At the same time the great classical virtuosos of the 1800's were selling out concert halls in London, much of the Celtic folk music we play today was being played as dance music in rural Ireland. Dance bands presumably made music on whatever instruments came to hand. The older wooden flutes would have been both more commonly passed down and presumably less expensive to acquire than the more modern flutes.

Keyless Flutes: The old wooden flutes had increasingly elaborate mechanical keywork to support playing classical music in many chromatic keys. However, the vast majority of Celtic folk music can be played without keys. Keywork can also be something of a maintenance headache, as a single leaky pad can interfere with the response of the entire range. Stories abound of legendary Irish players holding keys shut with rubber bands, or plugging up the holes with wax! During the Celtic revival of the 1970's, flute makers such as Hammy Hamilton began omitting the keywork on some replicas of the wooden simple system flutes. This made them both easier to maintain and less expensive.

Delrin/Polymer: More recently, a number of flute makers have been using Delrin (also known as polymer, Polypenco and acetal) as a material. Delrin is a synthetic that is strong, resistant to moisture, and with a musical resonance that is surprisingly close to wood. One might say that Delrin is the new Ebonite! Because they are typically less expensive than wooden flutes of equal quality, and because they are immune to climate-induced shrinking and cracking, Delrin flutes are popular for either a first flute or a "traveling" flute to own in addition to a more expensive and fragile wooden flute.

My Flute: I am currently making a keyless, Pratten-style flute from Delrin/Polymer with a number of features that make it well-suited to playing Irish/Celtic music. More information can be found on the next page.